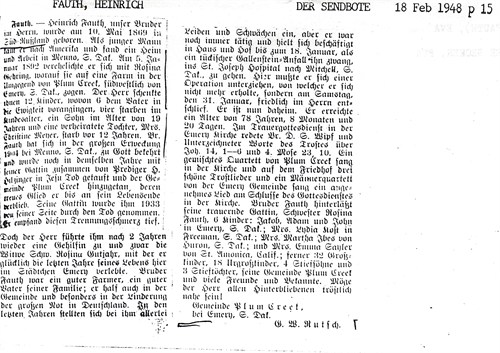 I was spending some time recently filling in information on a relative not in my direct line. Too many people in my tree? Too much information? Never. I know that at any time, the least likely person may email me with that wonderful tidbit for which I’ve been waiting years. So to make it easy for that as yet unknown person, I prodigiously add people. While working on Henry Fauth born 1869 in Russia and died 1948 in South Dakota I noticed discrepancies in the information for his wife Rosina Goerhing.  Some records had her dying in 1933, some in 1948 and yet there she was in the 1940 census living with Henry in South Dakota, albeit with a slightly different birth year.

The interesting thing about researching Germans from Russia and my Germans from Germany lines is that everyone used the same names. It was a rule. An unbroken rule that they must name every child with the same name and these children all had to be born the same year in the same place. If their child died, they just reused the name until it stuck. So not only did I have to verify I had the correct Rosina, I had to verify I had the correct Henry. The other interesting thing about researching records for Germans from Russia? Many of the records are in German. Did you know there were German newspapers in South Dakota, Montana and California?

I received a copy of Henry Fauth’s obituary written in German of course, and with my limited knowledge of the German language I began to pick my way through it when I had a breakthrough. Henry’s wife Rosina Goehring had died in 1933 and within months he married Rosina Goehring. Aha! There are two of them. That too must be a rule for Germans, always marry another person with the same name as your deceased partner.

When we are researching we need to keep in mind the fact that even though the name is the same we could really be looking at the record of an entirely different person. This is especially true when researching women. Look for secondary records or support for your hypothesis because that Mary in the 1850 census might not be the same woman as the Mary in the 1860 census. If something looks questionable to you then keep asking your questions. You too might have two Rosinas and not know it.